Powerball Tickets Worth $1 Million and $2 Million Sold in NJ as Jackpot Grows to $1.5 Billion

Who wants to be a billionaire? Everybody scrambling to buy tickets for Saturday night’s Powerball drawing, whose jackpot has grown to a whopping $1.5 billion. In reality, however, the eventual winner or winners will get far less, because well over half of it will go straight to the lottery commission and taxes. 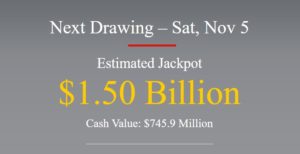 In Wednesday night’s drawing, which had a jackpot of “just” $1.2 billion, at least two tickets worth $1 million and $2 million, respectively, were sold in New Jersey.

Officials are expected to announce later Thursday where in New Jersey those tickets were sold.