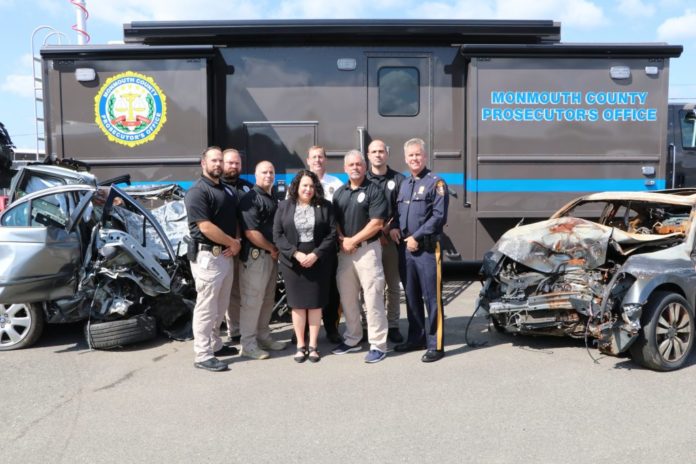 Thirteen people died in July due to vehicular incidents occurring across the County, the highest such figure recorded in any month since at least 2014.

“We are seeking the public’s help in preventing as many of these traffic accidents as possible, by taking proactive steps to stay safe and protect one another,” Linskey said. “It is an absolute imperative that we do everything in our power, across every level of law enforcement, to seek to ensure that this is a trend that gets quickly reversed.”

“Even one death on Monmouth County roadways is one too many,” added Manasquan Police Chief Michael Bauer, President of the Monmouth County Police Chiefs Association. “I and my fellow Police Chiefs stand in firm solidarity on this issue, resolutely pledging to leverage every strategic enforcement tool available to us in an effort to protect the safety and security of our motorists and pedestrians.”

A total of 41 people have died as the result of incidents occurring on area roadways so far this year, eclipsing the figures recorded in each of the last four full calendar years. An analysis performed by the Prosecutor’s Office revealed that the 41 deaths resulted from 34 separate events, including 26 collisions and eight instances of a pedestrian being struck and killed by a vehicle.

Approximately half of the individuals killed as the result of those collisions were not wearing a seat belt at the time of impact. Seven of the incidents involved a driver under the influence of alcohol or drugs, with seven more incidents currently under review, as results of toxicology tests remain pending. And each pedestrian killed this year was not in a marked crosswalk at the time they were struck.

The victims of these incidents ranged in age from 3 to 92; individuals dying in July alone included a mother and her youngest child, a son and both of his parents, and a group of three friends traveling together.

“Each of these 41 individuals left behind people who loved them – people who never dreamed that they would be gone so soon,” Linskey said. “And none of them imagined the last morning they woke up that their lives would be so tragically and violently cut short.”

The solution is simple, Linskey added: if you consume any alcohol or drugs, don’t get behind the wheel. Don’t use your cell phone while driving. Obey posted speed limits and road signs. Only cross the street in a marked crosswalk, and only when you have the right of way. And wear a seat belt for every trip, every time, no matter how short.

Extra caution should also be exercised on highways – 13 fatal incidents have taken place this year on local and back roads, but the other 21 all occurred on highways, including six on the Garden State Parkway and six on Route 9.

“New Jersey is a crowded state, with innumerable motorists in a great hurry to arrive at their destination, but gaining a few extra minutes is never a fair trade for putting your or someone else’s life at risk. All of us must exercise a little more patience and understanding, in order to arrive alive,” Linskey said.