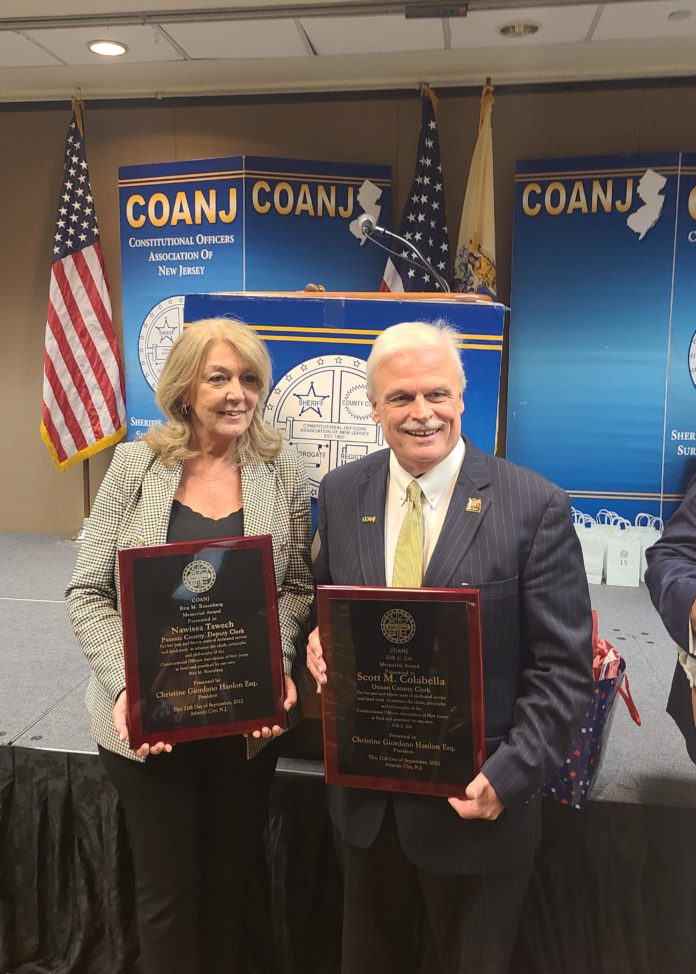 Ocean County Clerk Scott M. Colabella is the recipient of the statewide 2022 Gill Job Award for his public service efforts to the people of Ocean County and the State of New Jersey.

The award is given annually by the Constitutional Officers Association of New Jersey (COANJ) to a member who demonstrates the years of dedicated service and hard work repeatedly shown by the award’s namesake, Former Bergen County Surrogate Gill Job.

COANJ is a bi-partisan organization comprised of all of the Sheriffs, Surrogates, County Clerks and Registers representing New Jersey’s 21 Counties.

“I am honored to receive both the Rosenberg Award and the Gill Job Award during my years in the County Clerk’s Office,” Colabella said. “It has truly been a privilege to serve the people of Ocean County.”

“A heartfelt thank you to President Hanlon and all of my colleagues throughout our great state for honoring me with this prestigious award,” Colabella said.

Colabella began work in the clerk’s office in 1993 as an executive assistant to former Ocean County Clerk M. Dean Haines.

During his tenure, Colabella oversaw the office during the trials of Super Storm Sandy, which struck the region just days prior to the 2012 presidential elections.

He has also been credited with upgrading the County Clerk’s website and adding the newest technology to the Clerk’s office.

Most recently, Colabella helped coordinate major changes to the state’s election laws, including the expansion of vote-by-mail and the introduction of early voting.

“Scott has served during a most challenging time,” said County Commissioner Gary Quinn, who serves as liaison to the County Clerk’s Office. “He has done an outstanding job implementing these important changes and ensuring that voters’ rights are fully protected in our county. I am pleased to congratulate County Clerk Scott Colabella on winning this prestigious award.”