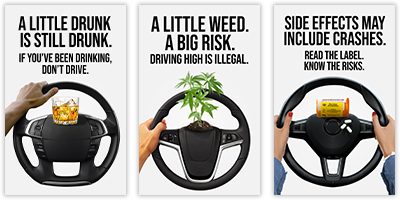 Acting Attorney General Matthew J. Platkin and the Division of Highway Traffic Safety (HTS) announced the launch of a statewide multimedia campaign to raise awareness about the dangers of driving impaired – whether under the influence of alcohol, cannabis, illegal drugs, or prescription or over-the counter medications.

Building on the success of the 2021 “Take Control of Your Destiny” distracted driving campaign, the 2022 “Wheel Risks” campaign features images of steering wheels to illustrate the dangers of driving while under the influence of drugs, alcohol, illegal drugs or medication. In the upcoming weeks, the campaign’s messaging will be rolled out on highway billboards, in radio and digital ads, on social media, and in many other venues throughout the state.

The launch of the campaign comes as New Jersey – along with states across the nation – works to reverse an alarming uptick in fatal crashes and deaths on its roadways last year. An analysis of contributing causes for the 2021 crashes has not been completed, but historically in New Jersey, more than a quarter of all fatal crashes involve a driver under the influence of either drugs or alcohol – or both. Indeed, in 2020, driving while intoxicated (alcohol and/or drugs) was a contributing factor in nearly 30 percent of the 550 fatal crashes recorded that year, according to a New Jersey State Police (NJSP) report.

“Our message is simple – impaired driving is dangerous and illegal,” said Acting Attorney General Platkin. “Driving under the influence of any substance that alters how you think and feel places lives at risk, and will not be tolerated on New Jersey roads. This campaign helps underscore how we are taking steps to make the state safer for all New Jerseyans, which is a key priority of the Murphy Administration.”

“Improving safety on our highways will take everyone doing their part, and that starts with each individual driver,” NJDOT Commissioner Diane Gutierrez-Scaccetti said. “Be part of the solution. Don’t get behind the wheel if you are under the influence of anything that can impair your judgement.”

“We’re urging New Jerseyans, if you plan to use cannabis, do so responsibly, just as you would with medication or alcohol. Our goal is to get ahead of the safety messaging by making it clear that if a substance has impaired your ability to operate a motor vehicle, it is illegal and unsafe for you to be driving,” said HTS Director Eric Heitmann. “Driving better high is a myth that puts everyone at risk. Staying sober and alert behind the wheel saves lives.”

“As we look forward to opening an adult recreational cannabis market in New Jersey we are committed to safe and responsible use,” said Jeff Brown, Executive Director of the CRC. “We want to make sure that cannabis users – particularly those who will be trying cannabis products for the first time – understand that physical effects can vary and that driving should be the last thing anyone does after consumption.”

Data tracked by NJSP shows that 2021 was the deadliest on New Jersey roadways in more than a decade.

The number of fatal crashes reached 674 that year, a nearly 23 percent increase over 2020. And those crashes claimed the lives of 704 people, 20 percent more than those killed the year before. Taken together, the number of crashes and deaths are the highest recorded in New Jersey since 2007.

The “Wheel Risks” campaign was created in cooperation with the New Jersey Cannabis Regulatory Committee (CRC), which regulates the State’s medicinal and recreational cannabis industry.