Agudath Israel of America announced the release of the following Kol Korei from the Moetzes Gedolei HaTorah.

There are hundreds of thousands of Jews in Ukraine (among them, many Orthodox Jews), who are in peril as a result of the Russian invasion into Ukraine. They face the dangers of war, as well as the danger of increasing antisemitism.

These Jews of Ukraine are in a state of fear, and in many situations without food, without shelter, without transportation, and without security from antisemitic attacks.

The Jewish Nation is one organism; when one limb of a body hurts, the whole body is in pain. Every one of us is obligated to feel the pain of our fellow Jews as if each of us would be in the same situation of being forced to leave home without preparation or bare necessities.

Therefore, we ask that all of us – living in peace – should gather in our shuls to say Tehillim for the merit of Ukranian Jews; particularly, after each tefillah to recite chapters 130, 142 and 121, followed by אחינו כל בית ישראל וכו’. We should hold the tefillos of Yom Kippur Katan this Wednesday, Erev Rosh Chodesh, 29 Adar II. The Sages say that repentance, prayer and charity remove the evil of the decree.

When the Jews of previous generations donated money to support the service in the Bais HaMikdash, they specifically gave half a shekel, not a complete shekel. The commentaries say that this was so that each person feel that he is part of the one organism that is the Jewish Nation. Through this realization, may we merit the cessation of all evil decrees from amongst us and that Hashem rest His Divine Presence on us with the speedy coming of Mashiach. 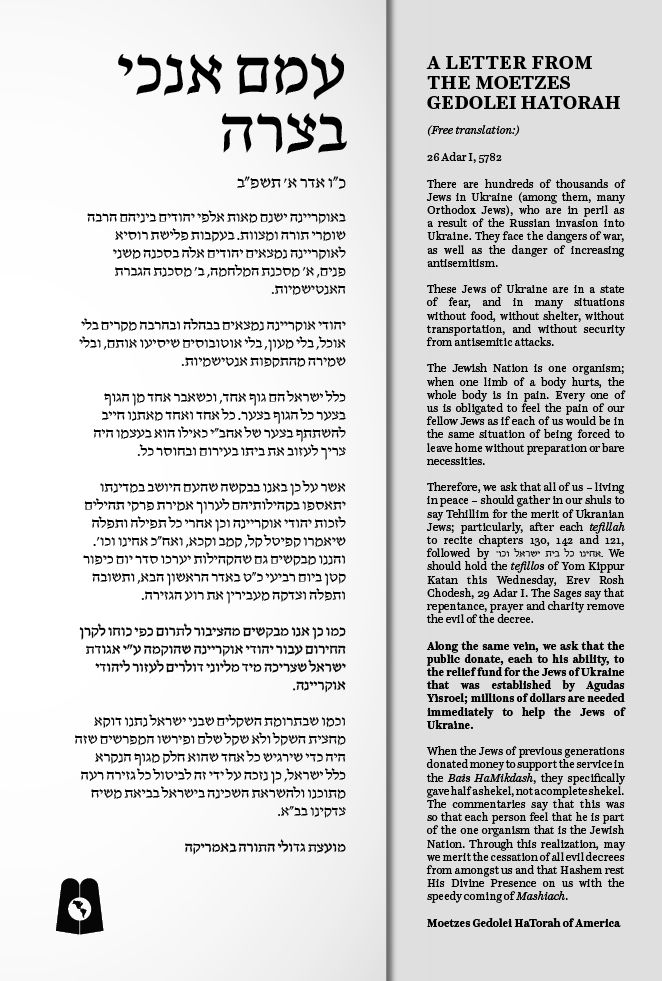