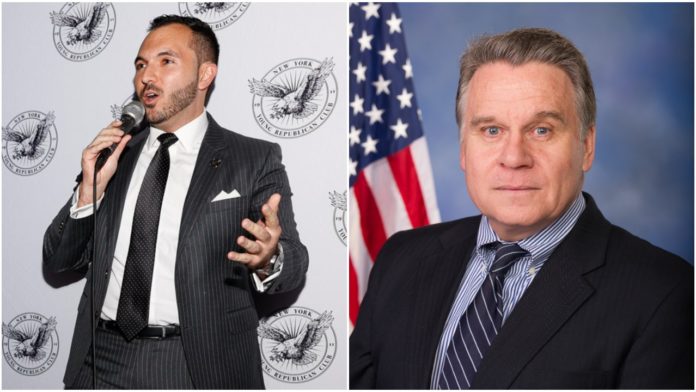 I read with great disgust a conversation that took place on Twitter involving preeminent frum Lakewood journalist Shlomo Schorr and Mike Crispi, an “America First” candidate who is challenging Rep. Chris Smith for the Republican nomination in June.

In reference to the recent terror attacks in Lakewood, Schorr wrote that Lakewood police documents showed that the attacker, Dion Marsh, told family members that “it’s going to be a bloodbath” and called Jews “the real devils.”

That’s when Mike Crispi weighed in. He quote-tweeted Schorr and wrote: “This blatant act of terrorism must be dealt with swiftly. Dion Marsh must face the death penalty. Period. I call on all other CD4 candidates including Rep. Smith to join me in this call. I STAND WITH THE PEOPLE OF LAKEWOOD and always will!” 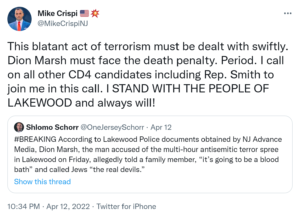 First off, I appreciate Mr. Crispi’s solidarity with Lakewood’s Orthodox Jewish community. With hate rising, we should be thankful for everyone who stands up publicly for us. However, in this case, I’m afraid Mr. Crispi was using the terror attacks to score cheap political points against Chris Smith.

This point was made by Yossi Wolk on Twitter, who replied to Crispi’s tweet, saying: I’m a member of the Jewish community, and I think this monster needs to sit. But calling for the death penalty for attempted murder, even in the 1st degree, is unrealistic. I appreciate the call for action, but not your using this to try to back your opponent into a fake corner.”

Crispi responded to Wolk, saying that the death penalty is an option if terrorism charges are added.

“Death penalty totally realistic here legally speaking if classified as an act of terrorism. Which it most certainly was. I don’t want to “box anyone in a corner.” I speak my mind and want evil doers to get what they deserve. Simple,” he tweeted in reply. 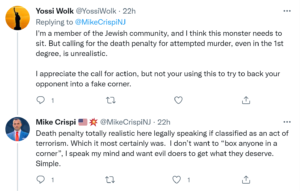 Again, these are nice sentiments from Crispi, but they’re inapplicable to the case. Saying the death penalty is on the table if terrorism charges are added is true, but he called for Smith to back the death penalty for the suspect when the suspect hasn’t been charged with terrorism. Thus, the only possible purpose of his call on Chris Smith was to use a terror attack against Jews as a political football.

Rep. Chris Smith has a decades-long history of being a sincere friend to Orthodox Jews in his district, and to everyone from all faiths. Smith is the co-chair of the House Bipartisan Task Force for Combatting Antisemitism, and he’s there for a reason. He stands up for the safety, security, and freedoms of Jews in his district, across America, and around the world.

And that troubles me deeply. Our lives are not a game to be played with, and they’re not a political pandering tool. If you want our votes, the first step is not to play politics with our lives.