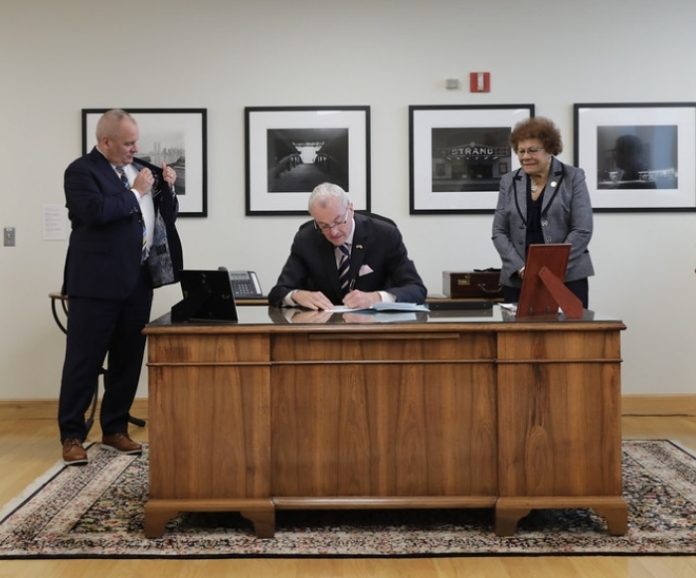 The signing of this bipartisan legislation follows Governor Murphy’s executive order requiring all state agencies to review their authority to suspend or revoke licenses, permits, registrations, and certifications of businesses that invest directly in companies owned or controlled by the government of Russia, Belarus, or its instrumentalities.

“New Jersey cannot and will not stand idly by as a tin-pot dictator invades the free and independent nation of Ukraine,” said Governor Murphy. “We are sending a strong message today to Vladimir Putin and his cronies in Belarus that their actions will not be tolerated. I am proud to have worked with Senator Sarlo, Assemblyman Schaer, and the Legislature to make certain that our state plays its part in ensuring that the exodus of businesses leaving Russia and Belarus continues. Our Administration stands with President Zelenskyy and the people of Ukraine in their valiant effort to fight back against Russia’s illegitimate and brutal invasion.”

“Treasury has already begun to carry out the Governor’s recent Executive Order and we stand ready and willing to help implement this new legislation in order to ensure taxpayer dollars are not supporting Russia’s indefensible invasion of Ukraine,” said State Treasurer Elizabeth Maher Muoio. “To date, we have assessed the pension fund’s exposure to Russian investments and are in the process of identifying what state contracts, if any, might have ties to Russian businesses. We will use the power of our purse to stand in solidarity with the people of Ukraine.”

If a person or entity is included on the list developed by the Department of the Treasury, then the person or entity is ineligible to:
– Enter into or renew a contract with a State agency, local government, school board, State college, or county college for the provision of goods or services;
– File or renew a Public Works Contractor Registration with the Department of Labor and Workforce Development;
– Be approved for or continue to receive an economic development subsidy from the Economic Development Authority, be awarded a municipal property tax abatement, or make or enter into a payment in-lieu of property tax agreement;
– Apply for or receive a tax clearance certificate from the Director of the Division of Taxation in the Department of the Treasury; or
Be certified as an urban renewal entity or a redeveloper for the purpose of planning or undertaking a project or redevelopment work and receiving the benefits that accrue from such activities.