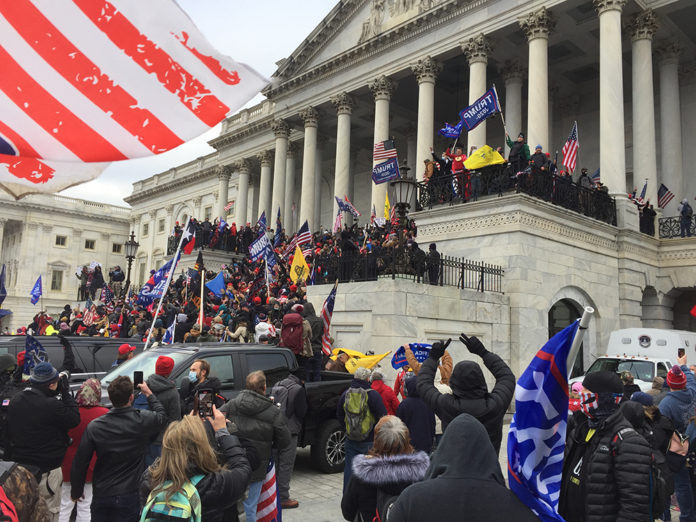 A New Jersey man has been arrested on felony and misdemeanor charges for assaulting law enforcement officers and other actions during the breach of the U.S. Capitol on Jan. 6, 2021. His actions and the actions of others disrupted a joint session of the U.S. Congress convened to ascertain and count the electoral votes related to the presidential election.

Salvatore Vassallo, 59, of Toms River, New Jersey, is charged in a criminal complaint filed in the District of Columbia with assaulting, resisting, or impeding law enforcement officers with a dangerous weapon and interfering with a law enforcement officer during a civil disorder, both felony charges. He also is charged with five related misdemeanor offenses. Vassallo was arrested on Sept. 14, 2022, in Toms River and made his initial appearance later that day in the District of New Jersey. He was released pending further proceedings in the District of Columbia.

According to court documents, on Jan. 6, 2021, Vassallo illegally entered the Capitol grounds. He hopped over a rail and joined a mob that was confronting law enforcement officers on the Upper West Terrace of the Capitol, near the Senate Wing Door and the Senate Fire Door. At approximately 4:26 p.m., he emerged from the crowd and faced the officers. Several seconds later, he abruptly charged at an officer with the Metropolitan Police Department who was in the process of assisting other officers. Vassallo grabbed and pushed the officer with what appeared to be a significant amount of force. Moments later, he departed from that area.

The case is being investigated by the FBI’s Washington Field Office, which identified Vassallo as #338 on its seeking information photos, and the FBI’s Newark Field Office. Valuable assistance was provided by the U.S. Capitol Police and the Metropolitan Police Department.

In the 20 months since Jan. 6, 2021, more than 870 individuals have been arrested in nearly all 50 states for crimes related to the breach of the U.S. Capitol, including over 265 individuals charged with assaulting or impeding law enforcement. The investigation remains ongoing.