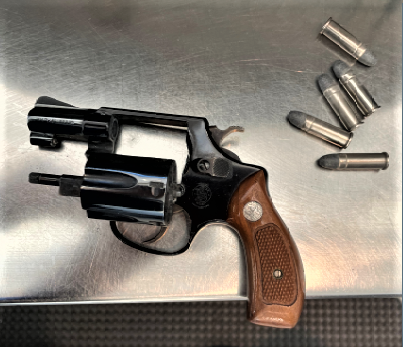 A New Jersey resident was arrested by police after Transportation Security Administration (TSA) officers removed a loaded handgun that was hidden behind the lining of her suitcase at a security checkpoint at Newark Liberty International Airport on Saturday, Sept. 3.

The gun, a .38 caliber revolver, was loaded with five bullets. It was the 11th gun caught at one of the airport checkpoints so far this year.

The handgun was detected when the TSA officer who was staffing a checkpoint X-ray monitor in Terminal B spotted the weapon inside the woman’s carry-on bag. When the bag was searched, the gun was found to be artfully concealed behind the lining of her bag. TSA officials alerted Port Authority Police who confiscated the handgun and arrested the woman, a resident of Orange, N.J., on weapons charges.

The woman claimed that she did now know whose gun was in her bag.

“Travelers should not attempt to conceal weapons among their carry-on items when entering a TSA security checkpoint,” said Thomas Carter, TSA’s Federal Security Director for New Jersey. “This is a fine example of how we use the technology available to us to help ensure that guns are stopped before someone tries to carry one onto their flight. In addition to her arrest, this woman also faces a stiff federal financial civil penalty.”

TSA has details on how to properly travel with a firearm posted on its website.