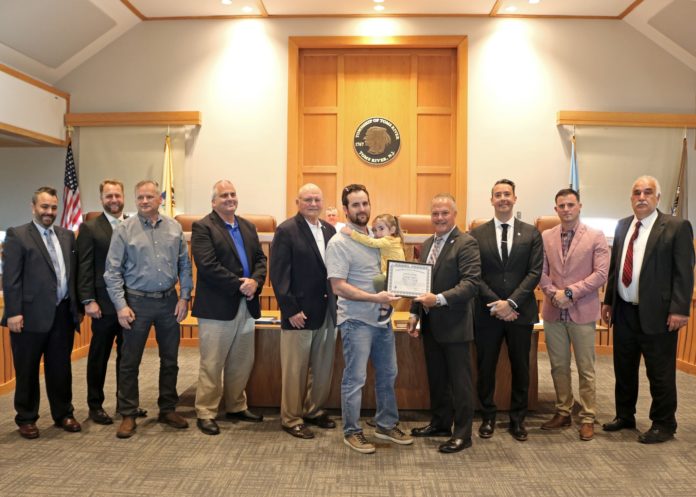 The Toms River Police Department honored three civilians who saved the lives of others in recent weeks.

Christina Cobb intervened and saved a woman who was actively being attacked by a suspect with a knife. Melissa Watson saved a two-year-old child from a potential tragedy while wandering alone in the middle of Route 37; and Frank Cerankowski stopped an attacker who stabbed his victim as they tried to get away. Mr. Cerankowski held the suspect on the ground until the police arrived.
“These three individuals jumped into action, potentially risking their own well-being, and undoubtedly saving the lives of complete strangers. They are the definition of “hero”, and we couldn’t be more appreciative of their bravery!” the police department said.
Full Stories:

On March 22nd, Officer Carolan responded to Route 37; Avon Hotel in reference to a missing child. Upon arrival, he spoke with Melissa Watson about a found 2-year-old child, wandering in the middle of Rt. 37. Melissa was traveling east bound on Route 37, when she observed a small in child in the middle of the highway.

Melissa immediately slammed on her brakes, attempted to alert other motorists, exited her vehicle, and retrieved the child. She brought the child back to her vehicle and pulled into the hotel parking lot, where she contacted this agency for assistance. Melissa should be commended for her quick actions, bravery, and kindness.

On March 23rd, a report came in that a female victim was being choked in the middle of the road on North Bay Ave near Veterans Park. Dispatch advised a male had possibly stabbed the female and witnesses were attempting to intervene. Prior to Officers arrival, Mr. Cerankowski heard a female yelling for assistance in the distance. He observed the male attacker and ran towards the altercation. He was able to remove the male attacker from the victim and pinned the attacker to the ground awaiting police arrival.

Frank Cerankowski should be commended for his brave and courageous actions, that not only put his own life at risk but saved the life of another.

On March 3rd, 2021, around 10:28 pm, Christina Cobb was working alone at the front desk of Howard Johnsons Hotel located on Hooper Ave. At this time, a female victim came running towards Ms. Cobb yelling for help. The female victim was being chased by a male suspect who was stabbing the female about the head and body causing multiple lacerations.

Ms. Cobb intervened by physically moving the suspect away and pulling the victim to safety. She then initiated first aid to the victim and contacted this agency for assistance. Ms. Cobb should be commended for her courageous and brave actions, not only putting her own life at risk, but saving the life of another.