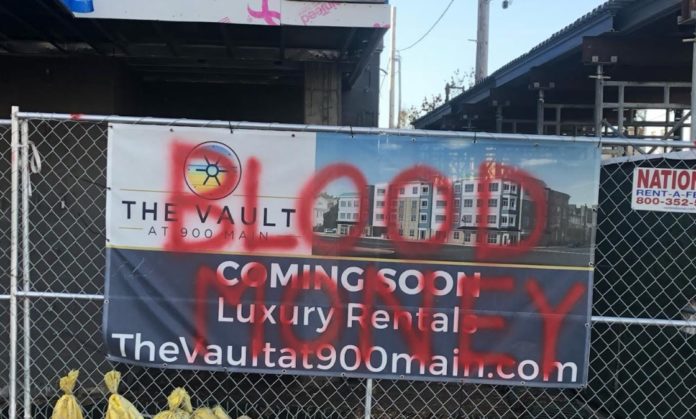 While there is a lot of talk around the country of Republicans raising the political temperature to dangerous levels, that certainly wasn’t the case on Sunday, when the headquarters of Republican candidates in Belmar were vandalized.

The vandals used red spray paint to write “blood money” on a Republican banner and Xs on the faces of GOP candidates Mark Walsifer, James McCracken, and Katrina Clapsis.

A police report was made in the incident.

“We demand that all three Democrat candidates immediately, unequivocally and publicly condemn this unacceptable behavior, and that they assist Belmar police in their investigation should any Democrat candidate or their supporters have any
knowledge of this event or its perpetrators,” Mayor Walsifer, Councilman Jim McCracken and Belmar Council candidate Katrina Clapsis stated jointly.

“We have purposefully run a clean race focused exclusively on the issues and totally devoid of any personal, polarizing attacks, because we believe that that is what the people of Belmar expect of us. To see the Democrat side engage in wanton destruction of property is as disappointing as it is appalling. This is not how we are supposed to conduct politics in Belmar,” said Belmar Mayor Mark Walsifer.

“Belmar residents will see past this vitriol and vote to support our team’s plan to reform and improve public safety, upgrade our infrastructure, and allow limited development in a responsible way so that we can grow Belmar’s economy and tax base to reduce the tax burden on our residents. Our plan will keep Belmar the best place to live on the Jersey Shore and secure its future for generations to come, despite what these
criminals and vandals may think,” said Belmar Councilman McCracken.

“This conduct is beneath us–and I don’t just mean Belmar, I mean our wider community as a whole. We are all welcome to our differing opinions, but we are supposed to solve
them through dialogue and at the ballot box, not through destruction of property. I hope — but very much doubt — that the people that did this have the integrity to come forward and take responsibility for their actions,” said Belmar Council candidate Katrina Clapsis. 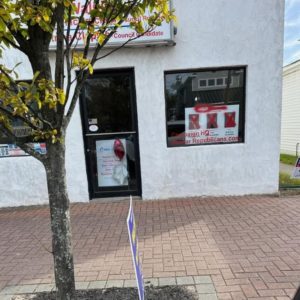 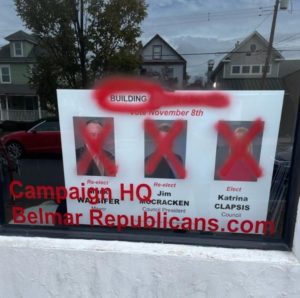