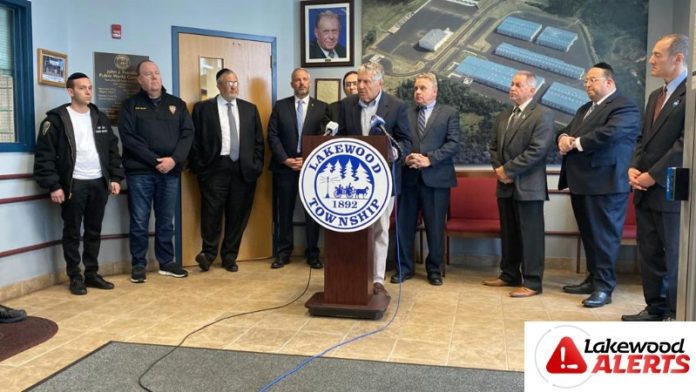 Numerous local, state, county, and federal officials gathered at the Lakewood Public Works building on Sunday to discuss and denounce the terror attack committed against Orthodox Jews on Friday.

“I’d like to thank everyone who was out Friday night helping,” said Mayor Ray Coles. “From the FBI, the Lakewood Police, the Jackson Police, the Prosecutor’s Office and the Sheriff’s Office.”

“I also want to mention the fact that we had many volunteers from the Lakewood Shomrim out there Friday night well after sundown, working to protect the citizens of this town,” he added. “It’s something we are all very proud of and we thank them for. We pray that we never need to call on them to do something like this again.”

“The horror that went through this town is beyond belief,” said Senator Singer. “People went to bed frightened for their lives… Antisemitism takes on many roles, and this is a role that ended up hurting people tremendously – people and communities.”

“We are looking out for potential copycat incidents or attacks,” Lakewood Police Chief Greg Meyer said. “We are going full steam… with volunteers as well – Chaveirim, LCSW/Shomrim, and all our partners to make a difference and show a united front that we are out for the community and will be on top of any events.”

Asked by reporter Shlomo Schorr whether an attempted abduction that occurred on Friday was related to the other events, Lakewood Police Captain Greg Staffordsmith said they have “not ruled out that possibility.”