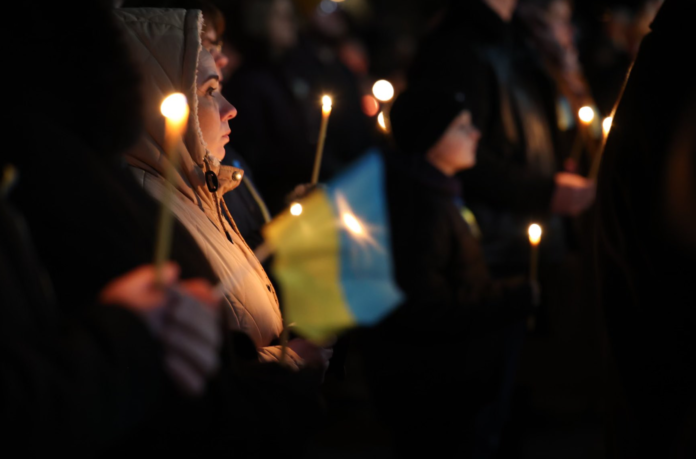 Acting in response to Russia’s unprovoked attack on Ukraine, the Senate today approved a bill sponsored by Senator Paul Sarlo and Senator Declan O’Scanlon that would prohibit public investments with Russia.

The Senate also expressed its overwhelming, bipartisan support for Ukraine by voting for a resolution condemning Russia for its unjustified invasion and expressing New Jersey’s solidarity with the people of Ukraine.

The sanctions bill, S-1889, would cut off public investments and other financial agreements with Russia and any business or individual with Russian interests. The prohibitions would also apply to Belarus.

“We won’t stand by while Russia conducts an unjustified war against Ukraine without taking action,” said Senator Sarlo (D-Bergen), the committee’s chair. “These economic prohibitions will make them pay a price by cutting off sources of revenue here in New Jersey. If other states follow our lead, it will make the sanctions imposed by countries throughout the world even more effective. We should try to bleed Putin and his oligarchs dry of their profiteering.”

The legislation would prohibit the state and local government in New Jersey from doing business with the Russian government or any business or financial institution with Russian interests. The bill would specifically prevent the state from investing pension or annuity funds in companies engaging in financial activities in Russia, and would prohibit the state from banking with institutions that provide banking services for Russia.

“It’s clear that Vladimir Putin has little fear that the people of his nation will learn the truth of the atrocities being committed under his command in Ukraine when they only have access to censored media that spews lies and fake news,” said Senator O’Scanlon (R-13). “While Putin might be able to control the flow of information within Russia, he won’t be able to shield his nation from the economic impact of sanctions and divestment undertaken by governments across the world, including the State of New Jersey. These unified actions are not intended to hurt peaceful Russian citizens, but to send a strong message to the oligarchs and others in positions of power that their leader has crossed a line with his war in Ukraine that the international community will not tolerate.”

Under the bill, a person or entity that engages in investment activity in Russia would be prohibited from obtaining a professional service contract from the state or a local government, a tax credit or other economic incentive issued by the Economic Development Authority, a tax abatement, or a payment in-lieu of property tax agreement.

The Senate also expressed New Jersey’s full-fledged support for Ukraine by voting unanimously for Senate Concurrent Resolution 88, calling on Russia to stop its violent attack and recognize Ukraine as a sovereign state, free to choose its own leader and future. The resolution is sponsored or cosponsored by every member of the Senate Military and Veterans Affairs Committee.

“We are declaring our solidarity with the people of Ukraine in their courageous stand against the unjustified attack by Russia. We want them to know that we are standing with them in support of democracy and the right for self-determination. Всі ми громадяни України (We are all citizens of Ukraine).” Senator Joe Cryan, chair of the Senate Military and Veterans Affairs Committee.

“We join in unity and solidarity with the people of Ukraine who have been inundated with the attacks and bombings brought on with the ongoing invasion by Russia. Ukrainians have shown tenacity in their pursuit of democracy. We are making every effort to support our Eastern European allies. We offer our prayers to Ukraine and its people.” Senator Nilsa Cruz-Perez, vice chair of the Senate Military and Veterans Affairs Committee.

“New Jersey is joining the world community in condemning Russia’s illegal invasion of Ukraine and its brutal and horrific attacks that have targeted and killed civilians, including children. We stand with besieged Ukrainians as they mount their courageous defense and with the thousands of disgusted Russians who have taken to the streets to call for a peaceful end to this senseless war.” Senator Sam Thompson (R-12), a member of the Senate Military & Veterans’ Affairs Committee.