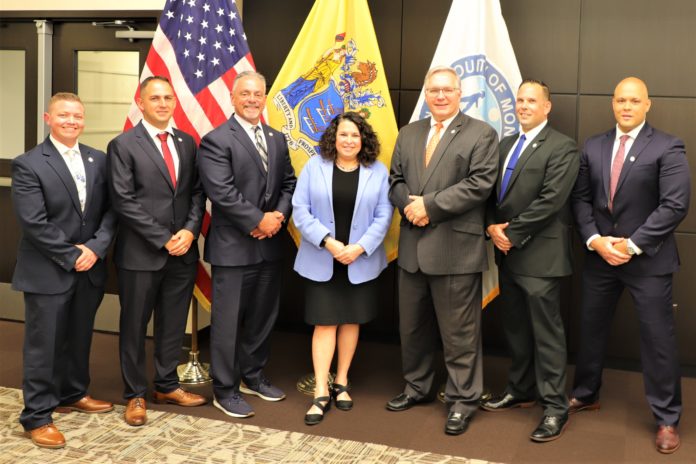 Yesterday may have marked the first day on the job for four newly hired detectives at the Monmouth County Prosecutor’s Office, but today will not mark the first time they made headlines.

Nicolas Logothetis, Connor Johnson, Aaron Shaw, and Joseph Friscia had each made a name for himself long earlier.

“We consider ourselves truly fortunate to be welcoming four dynamic detectives who throughout their careers have made a habit out of serving the public with distinction and honor,” Acting Monmouth County Prosecutor Lori Linskey said. “Our sincere expectations for each of them is that they continue to build upon their already stellar body of work.”

Logothetis, previously of the Hazlet Police Department, wasted no time in building a reputation for diligence; he was the recipient of the 2014 and 2015 Mothers Against Drunk Driving (MADD) Law Enforcement Distinguished Service Awards for leading his Department with a combined total of 28 DWI arrests over his first two full years on the job. He was also the recipient of a 200 Club of Monmouth County 2017 Commendation Award for teaming up with Long Branch Firefighter Frank Harris to save the lives of two elderly residents whose home was on fire. Having served Hazlet in the capacity of Detective, Field Training Officer, Motorcycle Officer, CPR Instructor, and Radar Instructor, Detective Logothetis holds a Bachelor of Arts in Justice Studies from Montclair State University and a Master of Arts in Criminal Justice from Monmouth University.

Johnson, previously of the Morristown Bureau of Police in Morris County, several years ago became the first known openly transgender law-enforcement Officer in New Jersey history – he is now the first known openly transgender Detective ever to serve in a county prosecutor’s office in the state. Also a designated LGBTQ Law Enforcement Liaison, in that capacity he worked closely with the New Jersey State Police and New Jersey Office of the Attorney General (OAG) in creating public awareness of OAG Directive No. 2019-3, Law Enforcement Interactions with Transgender Individuals. Prior to joining the Bureau, Johnson served as a County Correctional Police Officer with the Morris County Sheriff’s Office and a Public Safety Dispatcher with the County of Morris; he holds a Bachelor of Arts in Criminal Justice from Centenary College.

Shaw joins the Prosecutor’s Office following 15 years with the Eatontown Police Department, having most recently attained the rank of Detective Sergeant. Joining the MCPO as a Detective marks a homecoming of sorts – as a teen growing up in the area, Shaw was a participant in the office’s “6 a.m. Club,” a summer youth basketball league and mentorship program that was run by MCPO detectives. The detective mentors worked with the participants from 9th grade through college, and the program inspired Shaw to pursue a career in law enforcement. The recipient of more than half a dozen departmental citations or commendations for his investigative efforts on incidents such as a juvenile stabbing at Monmouth Mall and a shooting case that yielded the recovery of three handguns and a large quantity of heroin, along with two arrests, Shaw also holds a Bachelor of Arts in Criminal Justice from Monmouth University and a Master of Administrative Science from Fairleigh Dickinson University.

Friscia, an eight-year veteran of the Union Beach Police Department, most recently served there as a Sergeant supervising a contingent of approximately 30 sworn officers, having also been designated as his Department’s Resiliency Officer, assisting colleagues in coping with stressors inherent to the job. Recipient of the 2019 Union Beach Police Department Officer of the Year “Officer William H. Letts Award,” Friscia has a track record of working the Department’s most high-profile and intensive narcotics, sex crimes, and internal affairs cases; he also holds an Associate’s Degree from Brookdale Community College and a Bachelor of Arts from the John Jay College of Criminal Justice.

“Our hiring process for new detectives is rightfully rigorous, and for good reason – this team of new hires with these outstanding credentials marks nothing short of a wealth of riches for the Office,” Acting Chief of Detectives John G. McCabe, Jr. said. “We have every confidence that they are capable of making an immediate contribution to our office, our cases, and our residents.”