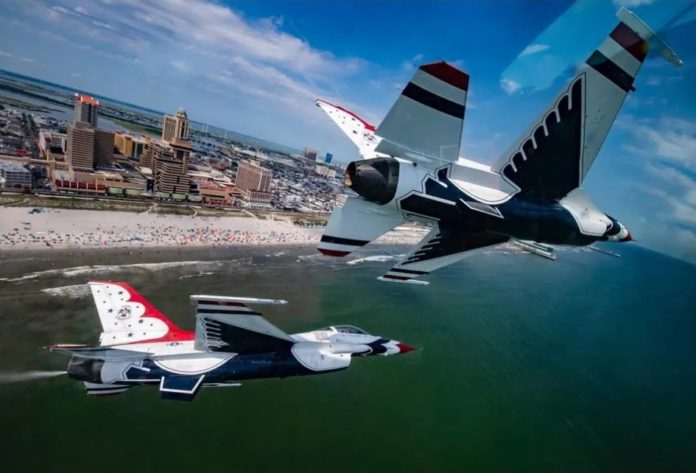 A massive aerial demonstration of flying prowess is coming to Atlantic City next Wednesday, with some 400,000 people expected to come see the 4-hour spectacular spectacle.

Here’s what to know: the show itself is free and can best be seen on the Atlantic City boardwalk and beaches. In front of the Jim Whelan Boardwalk Hall (2301 Boardwalk, Atlantic City, NJ 08401) is the absolute best spot, according to officials. If you’re willing to spend some money, ocean-facing hotel rooms will also provide incredible views of the show.

Want to avoid Atlantic City? You can still watch the show. Just go to the beaches at Margate, Ventnor, or Brigantine, and you should get a nice view. Or even better, get a boat and watch from the ocean itself. Just keep in mind that there will be a “no boat zone” during the event, so you will have to be careful where you go.

The show itself will begin at 11:30 am Wednesday morning when the United States Army Parachute Team, called the Golden Knights, will parachute down. The event ends at 3:30 pm following the performance of the U.S. Air Force Thunderbirds.

Here is the full schedule:

11:00 AM: Airspace Closes for Airshow, TFR in Effect, Boats in Place