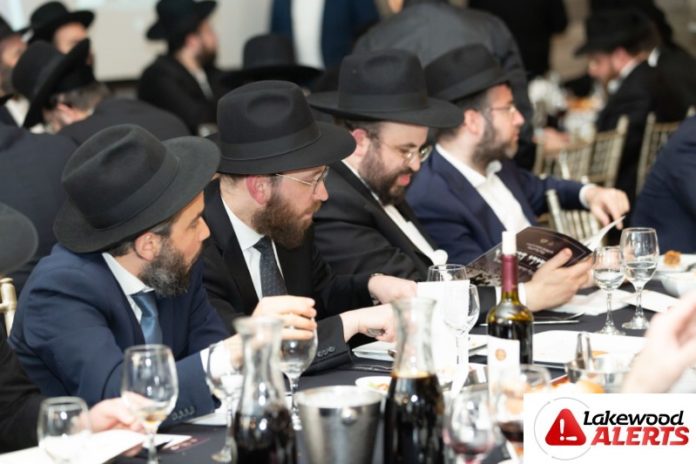 A beautiful mass gathering of representatives of over 300 shuls in Lakewood, Jackson, Toms River and Howell took place on Sunday, May 15, in Eagle Ridge Country Club.

This was the latest gathering held in advance of the historic “Adirei Hatorah-Warriors of Torah” Event that will take place after Shavuos. It follows on the heels of the previous week’s gathering of over 200 area Rabbanim, and the week before that’s gathering of 300 BMG Roshei Chaburah. At the Rabbanim asifa, every Rov was asked to appoint a representative from their kehillah to serve as the go-between for arranging tickets and logistics for their members who wish to take part in the historic occasion.

The representatives in attendance were a very diverse crowd from all sectors of the community – chasidish, Litvish, Sefardic, etc. They all came together to show solidarity with the organizers of the event and the yungaleit of BMG, who will be honored. They were briefed about plans for the event and received details about what their role will be.

It was explained that tickets for the event will not be available at the gate. They will need to be obtained in advance. Talmidim of BMG will receive tickets through their Rosh Chaburah and Rabbeim will receive them through their schools at a rate that was subsidized by a generous donor. All others will only be able to purchase tickets through their shul representative. Because tickets are in limited supply to meet the demand and they are already going fast, representatives were urged to tell the members of their shul to purchase theirs as soon as possible to ensure that they are not left out of this historic maamid.

The Adirei Hatorah event will be held on June 12th in the 10,000 seat Cure Insurance Arena in Trenton. It will mark one year since the beginning of the campaign led by R’ Lazer Scheiner and a group of askanim to triple the Kollel check from $334 to $1,000 per month, plus a $750 yomtov bonus for Sukkos and Pesach. This campaign led to almost 4,000 yungaleit receiving the large raise and the BMG Kollel budget increasing by almost $40 million to $57 million a year.

At the gathering, it was clearly explained that the purpose of the event is to celebrate the ameilus b’Torah of the thousands of yungeleit of BMG and to uplift and glorify the kavod haTorah.  This was the goal of the campaign to raise the kollel checks from the beginning and the impetus behind the massive support it received. The campaign’s success in raising the bar for the kavod of the yungaleit of BMG and beyond will be the focal point of this joyous occasion.

Rav Zalman Sorotzkin, Rov of Bais Medrash Lutzk and one of the driving forces behind the event, explained at the gathering, “The essence of the campaign to raise the kollel check was that a group of balhabatim who have incredible kavod for the Torah saw how little the yungaleit were receiving and this bothered them to core. They felt that Klal Yisroel was failing to recognize the chashivus of the lomdei Torah and expressed a desire to be part of an effort to rectify this by increasing the kollel check. When they met with the Roshei Yeshiva, they were amazed by their commitment and by how much they recognized the chashivus of ameilus b’Torah.”

R’ Yosef Heinemann, one of the major forces behind the campaign to raise the Kollel check and a member of BMG’s administration, explained, “The purpose and goal of the maamid on June 12th is to personify the chashivus and beauty of a yungerman that sits and is amal b’Torah day in and day out, as well as to give over the message to all those present and to the entire world that this yungerman’s ameilus b’Torah is what is holding up the world and that it is our unique zechus that here in Lakewood, we are the hometown of the largest kollel  in the world.”

He added, “I was zocheh to be part of the group that approached the Roshei Yeshiva with the idea to raise the kollel check, and from Day One, the focus was on how to get the message out to the world that a yungerman who sits and learns and is moser nefesh for Torah is the ultimate crown jewel of Klal Yisroel.”

The shul representatives were also privileged to hear words of chizuk regarding the importance of hachzakas haTorah from the Rosh Hayeshiva Rav Malkiel Kotler shlita and short words of appreciation from R’ Lazer Scheiner. Mr. Scheiner thanked them for doing their part to ensure the success of the campaign.  He expressed his gratitude that so many people are working together for the benefit of this initiative and said that every individual’s involvement adds to the momentum and helps to be meromem the kavod haTorah.

In addition to the details about the ticket purchases, the representatives were also provided with some newly released details of the event. The program will feature a Siyum Hashas, festive music and dancing, video presentations and three enthralling speeches, including one from Rav Dovid Cohen shlita, Rosh Yeshivas Chevron. There also will be a dinner reception and free transportation to and from the event.

The feeling amongst the crowd at the gathering was very friendly and there was a lot of comradery for an extremely lofty cause, combined with a sense of awe and solemnity for being able to be a part in such a momentous event.

Tickets are available through your shul’s representative. To arrange ticket availability for your shul, email AdireiHaTorah@TTFY.org 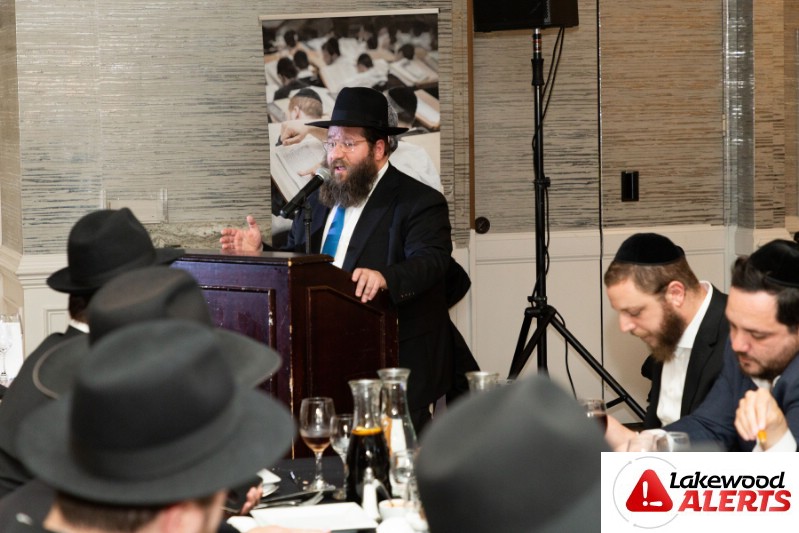 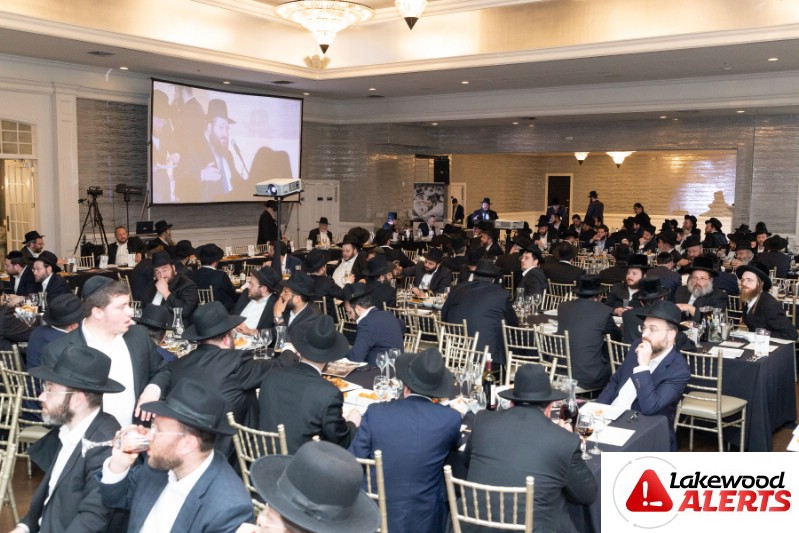 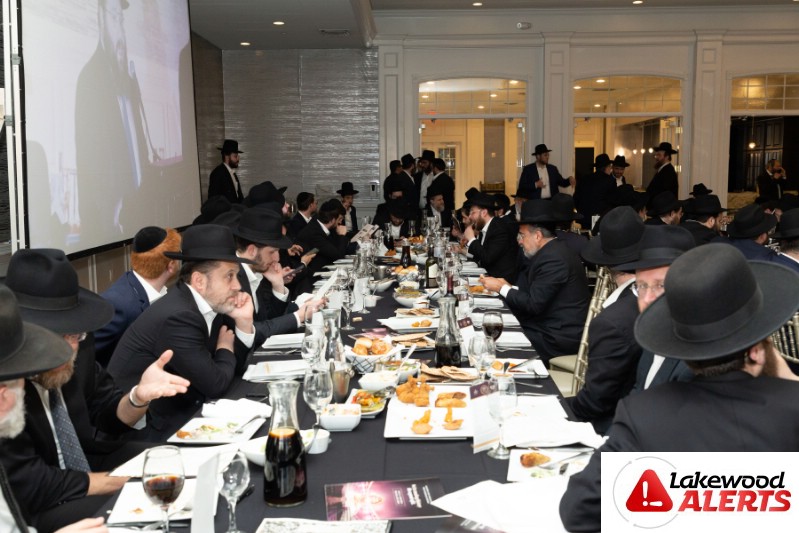 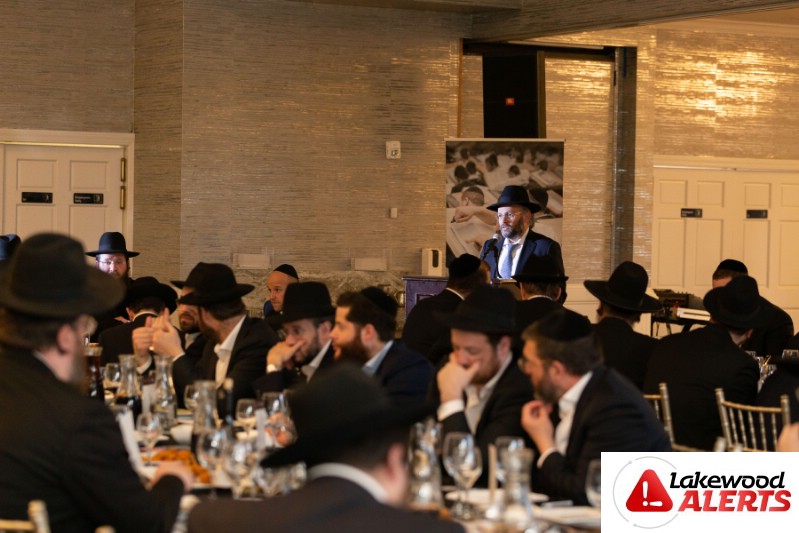 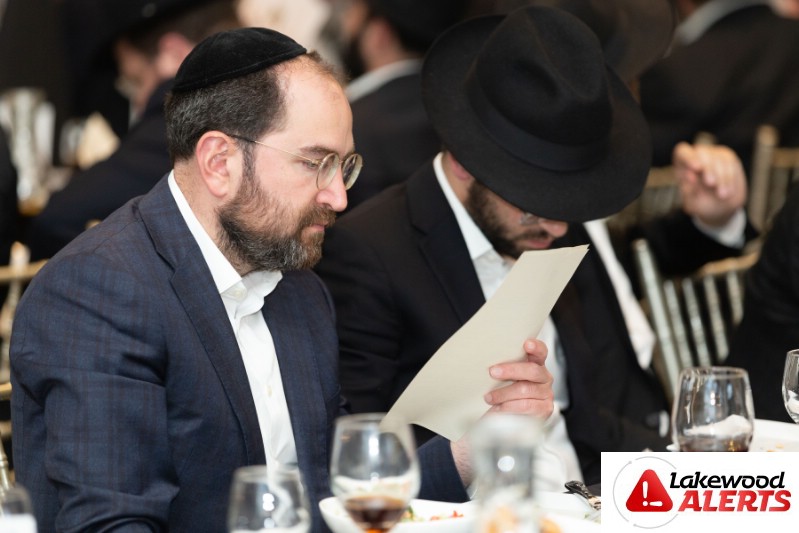 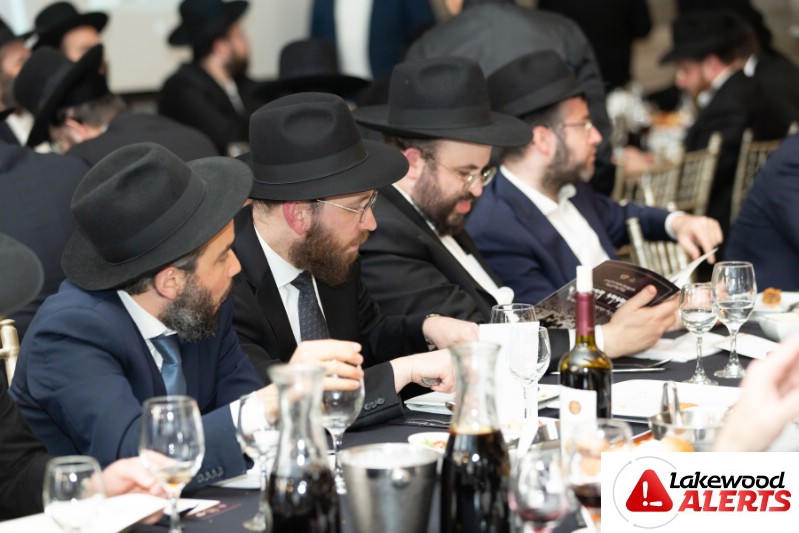 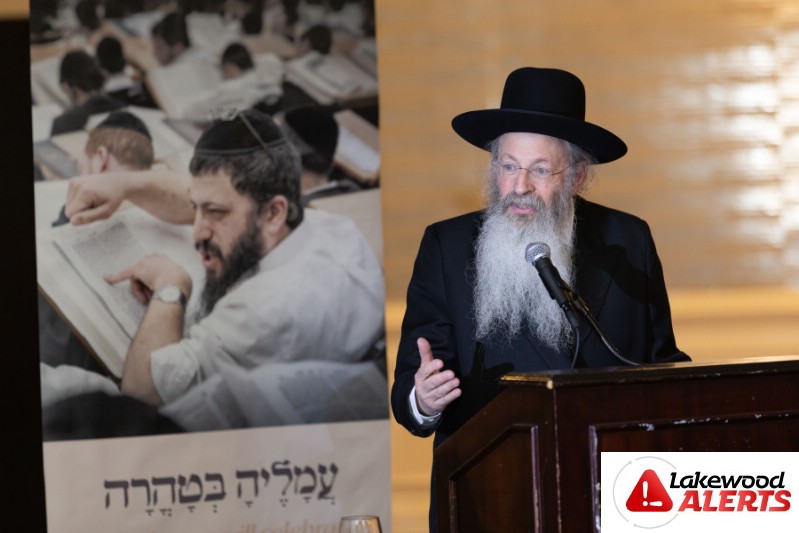 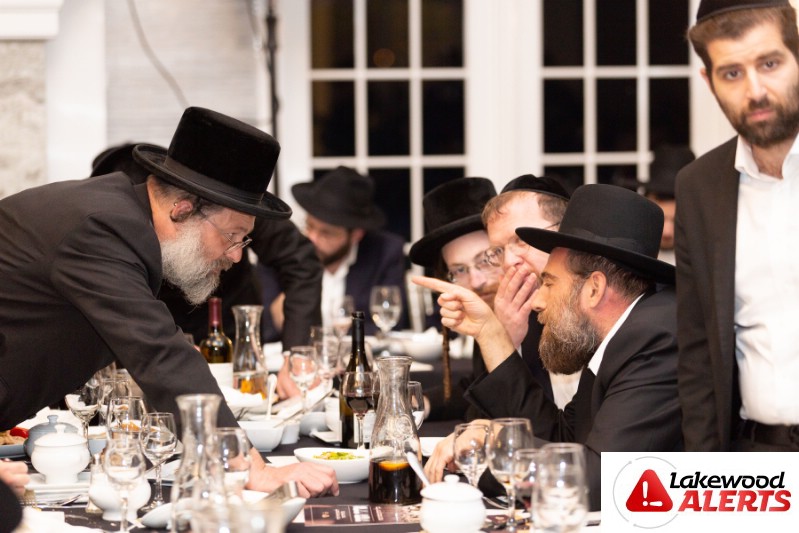 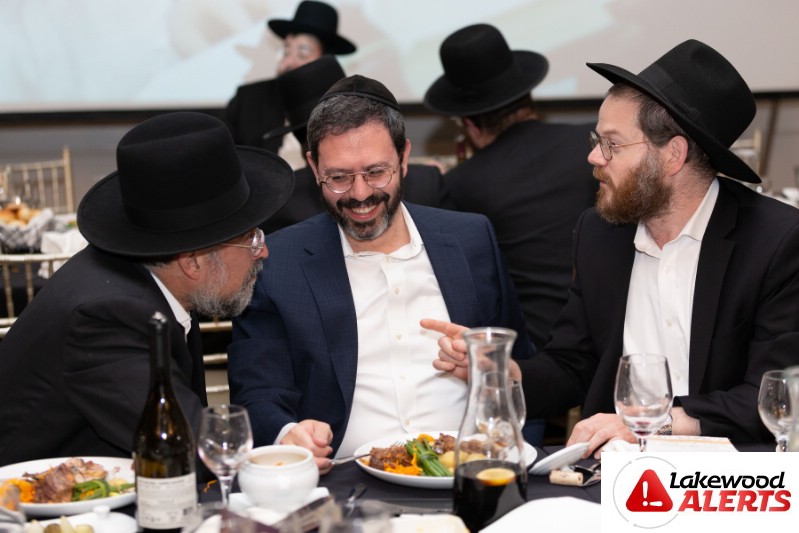 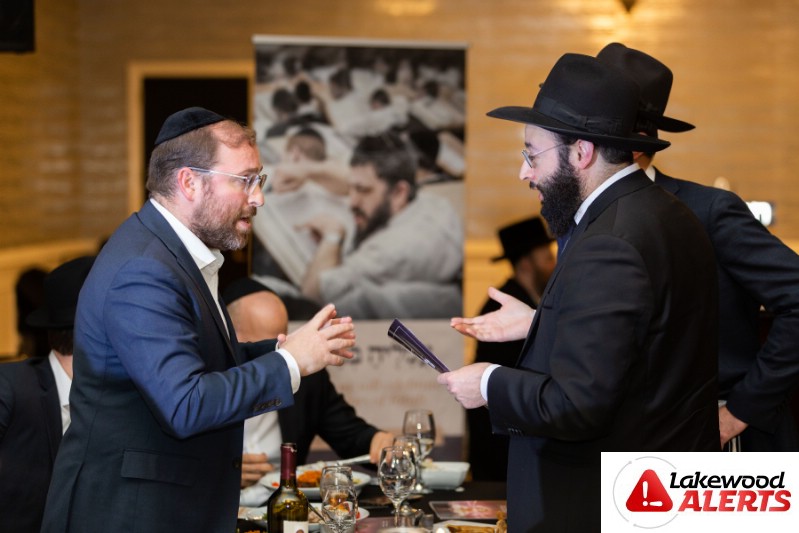 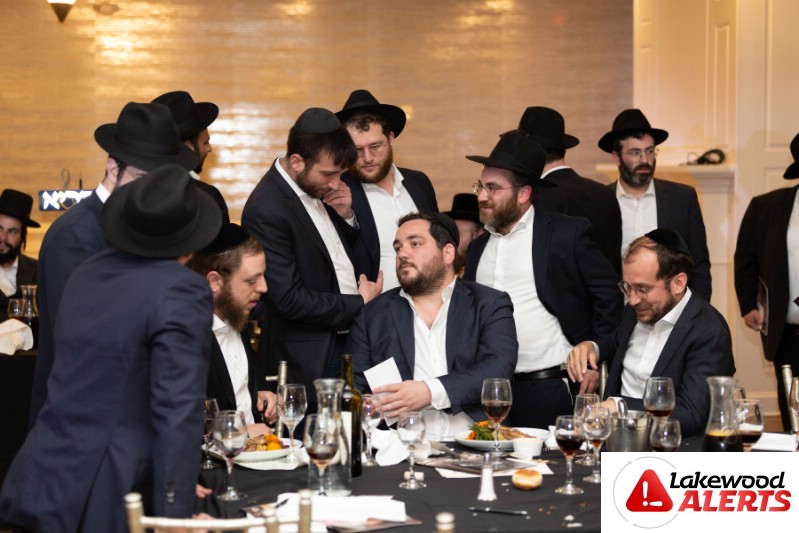 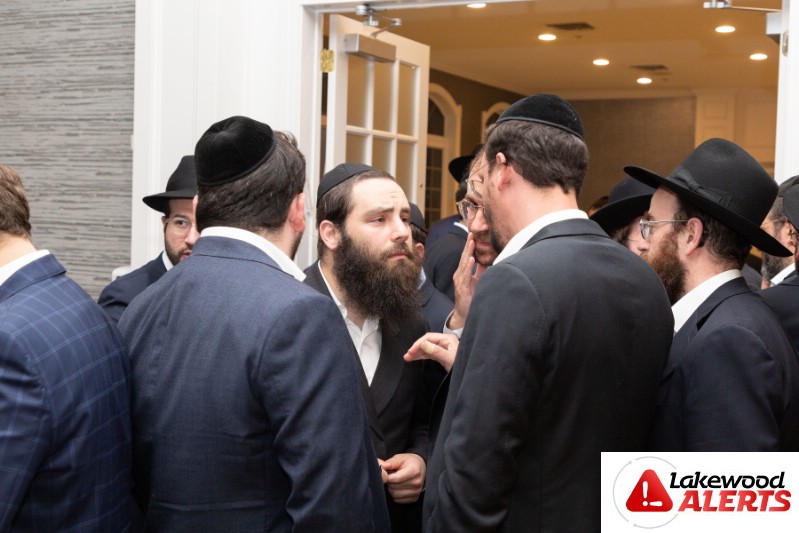 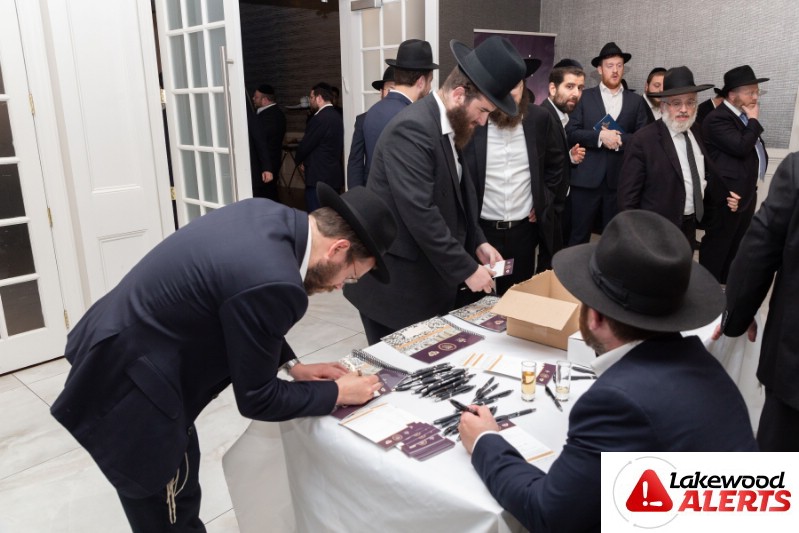