MAILBAG: Will This Community Become the New Lakewood?

Last week, a viral LinkedIn post amused a lot of people, but actually got me thinking. And it should make all of us think.

Eli Fried, a popular local financial advisor and columnist in The Voice of Lakewood, posted this on LinkedIn: “Lakewood apartment shortage. I don’t get it. What are young couples doing? There seems to be almost 0 availability. And what’s on the market is super pricey. The Masa U’Matan has been down to 1 or two pages for months… from a high of about 18. Where are young families moving if they aren’t ready to buy?”

His post received a number of responses, but one of them went viral.

Yoel Judowitz, the CEO of Storytribe Media, had a humorous take on Fried’s post.

“OUT OF TOWN!,” he wrote. “I don’t know why people don’t get it already. There’s a beautiful out-of-town community only an hour and a half from Lakewood with more availability by the day. They have shuls, kosher stores, and they are working hard to get young kollel families. It’s called Flatbush and I think it’s going to be the next big thing.” 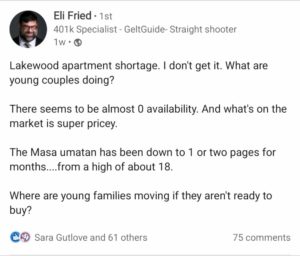 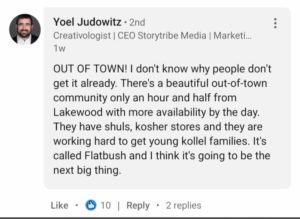 Funny, right? But also, quite thought-provoking. Lakewood was once a cheaper option for many families, prompting them to buy houses here – away from expensive Brooklyn. But that’s just not the case anymore. Housing in Lakewood and its surrounding are through the roof. Average apartment prices are similar, if not higher, than in Brooklyn. And it’s not just Brooklyn either. The case can be made that it’s no longer cheaper to live in or near Lakewood than it is to live in Passaic, the 5 Towns, Waterbury, or somewhere else on the East Coast.

Is Flatbush the next Lakewood? Of course not. But the fact that it could even be the kicker in a joke should give pause for thought.

Besides for astronomical housing costs, Lakewood just isn’t what it used to be – for better or for worse. Lakewood was once a low-cost town whose infrastructure was geared towards BMG yungeleit and their families. That’s just not the case anymore. While BMG still plays a crucial role in town, there are now thousands upon thousands of families that have no connection with BMG. And because of this, there are values that have become commonplace that are not necessarily in line with those of the average BMG yungerman. I’m not saying this is a good thing or bad thing, and it’s besides the point. It’s just reality. So, for a family that is looking for a very specifically yeshivish community, Lakewood doesn’t necessarily offer that these days any more than any other community does.

Furthermore, I know of several very “Lakewoody” families who are thinking of moving to other communities because Lakewood and its surrounding have become a homogenous blob – everyone is in perfect lockstep with each other, and if you’re not, you stick out like a sore thumb. That’s fine for most, but many people don’t like it and don’t want their kids growing up with that pressure. Rather, they’d choose to live in Brooklyn or some other community (whether in-town or out-of-town) where individualism doesn’t come with disapproval from some people.

Bottom line: does Lakewood really offer the advantages that it did 20 years ago? As a longtime Lakewood resident, I really can’t say it does.