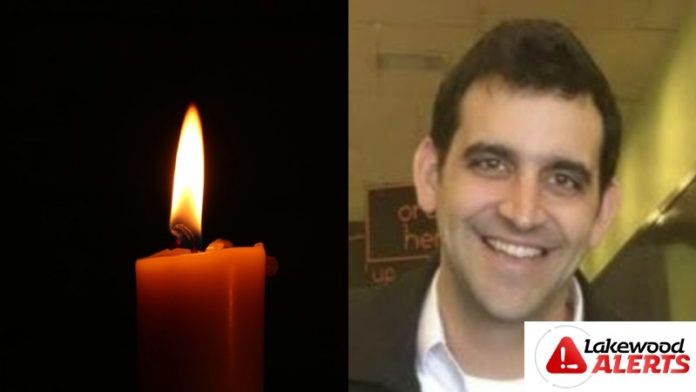 After many weeks of painstaking searching by Achiezer and other organizations, Jackson resident Mordy Gelfand has sadly been found deceased, having perished in a tragic accident in New Orleans. Mordy had gone missing while on a business trip to the city, and was later confirmed to have been involved in a terrible mishap that cost him his life.

The meis is being tended to by Chevra Kadisha and is currently being flown to New York for kevurah.

Mordy, 33, was a loving husband and father who took tremendous pride in his family and was beloved by the Jackson community and all who were fortunate enough to know him. Mordy z”l took special pride in being deeply involved in his shul and his children’s schools, often going out of his way to promote and advance the interests and needs of the tzibbur.

In his unassuming and quiet way, Mordy z”l was a tremendous baal chesed, and an individual who was described as selfless, deeply empathetic, and willing to go the extra mile for another’s sake.

He is survived by his wife Devorah, his children, his parents – Yaakov and Shira Gelfand – and his siblings – Adina Erez, Sarah Tova Stern, Avi Gelfand, and Aryeh Gelfand.

The family told Lakewood Alerts that the entire family are extremely grateful for Klal Yisroel’s tefillos on behalf of Mordy, and for their interest and concern for his wellbeing.

“It gave us and continues to give us tremendous chizuk knowing that so many yidden cared for Mordy and were davening for his safe return home,” a family member told Lakewood Alerts.

“We are also profoundly grateful to the volunteers from Hatzolah, Central Jersey Chaveirim, Shomrim, Achiezer, and other organizations, as well as the local police chaplains, for everything they did to find Mordy and bring him back to us.”

The family further extended their thanks to Yehuda Eckstein, Elliott Zaks, Chaim Meisels, Yossi Greenwald, Yaakov Gade, Mendy Schecter of New Orleans Chabad, and many others. Most notable is the tireless work of Boruch Ber Bender of Achiezer, who worked 24 hours a day for weeks on end on behalf of the family.

The Levaya is scheduled to take place at 10:30 am Tuesday morning at the Lakewood Chapel. Kevurah will take place in Long Island.