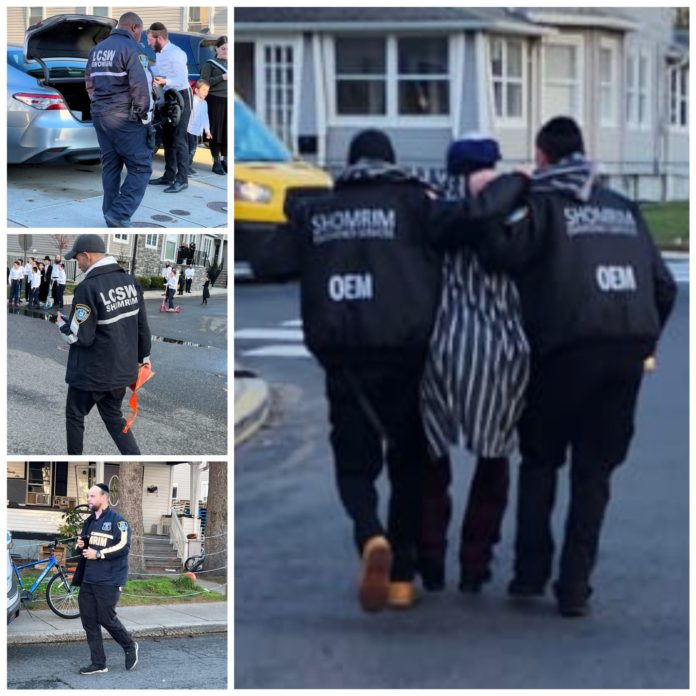 On Friday, November 25, at approximately 3:02 p.m., Lakewood Shomrim, a branch of the Lakewood Township Office of Emergency Management, was dispatched to a scene on E. 4th Street in Lakewood where a vehicle had struck a gas line on the exterior of a large apartment building. Shomrim units were at the scene within minutes and immediately began collaborating with the Lakewood Police Department, the Lakewood Fire Department, Lakewood EMS, and the Ocean County Sheriff’s Department to establish a perimeter and command of the scene, as well as creating and implementing an evacuation plan for the structure’s residents.

Shomrim officials swiftly obtained approval from the Lakewood Department of Education to utilize its facilities as a temporary shelter, with Shomrim members immediately setting up the facility to accommodate the several hundreds affected individuals and families. A secondary shelter to house the pets of affected residents was established as well.

As the evacuations commenced, Shomrim units assisted numerous individuals, including multiple immobile building residents required assistance being removed from their apartments, as well as many residents who required their medication to remain with them as they were displaced to the shelter. Shomrim members made certain that every resident was accounted for and their needs met until American Red Cross officials arrived Friday night to oversee operations at the shelter.

With approximately 200 Sabbath-observing residents in nearby homes also evacuated, Shomrim officials began devising plans to house and feed them over the course of the Sabbath, if necessary.

Simultaneously, Shomrim was in contact with New Jersey Natural Gas and Lakewood Township officials to ensure the swift resolution of the life-threatening crisis and the ability for residents to return to their homes.