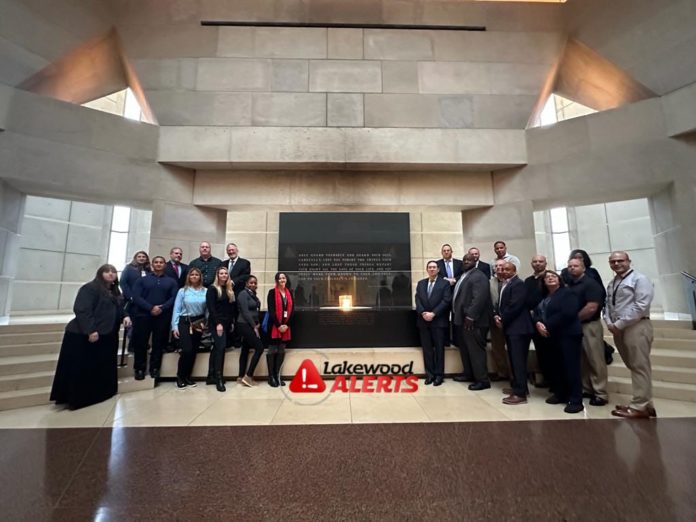 Officials from Lakewood Township, Beth Medrash Govoha, Agudath Israel of America’s New Jersey Office, and other organizations and agencies are currently on a trip to Washington, D.C.

The itinerary included meetings with multiple high-level D.C. officials, both elected and unelected, as well as a visit to the Holocaust Memorial Museum in the nation’s capital.

The Lakewood Police Department released the following statement about the visit:

About the U.S. Holocaust Memorial Museum

The U.S. Holocaust Memorial Museum is a 3-story exhibition of the rise of Nazi Germany, the Holocaust years, followed by liberation and the aftermath.

The opening floor explores the rise of the Nazi party in Germany in 1933 through the outbreak of World War II in September 1939. This portion of the exhibition explores turning points in the Holocaust such as the Nuremberg Race Laws, Kristallnacht, the Voyage of the St. Louis, and the Invasion of Poland.

The middle floor examines the evolution of Nazi policy toward the Jews, from ghettoization to mass murder in killing fields and gas chambers. On this floor, visitors will encounter primary-source artifacts, information on the invasion of the Soviet Union, photos of deportations of Jews to camps, and oral testimonies from Auschwitz.

The final floor displays the liberation of the Nazi camps and the Allied victory over Nazi Germany in 1945, rescue and resistance efforts, and the aftermath of the Holocaust. At the end of this floor, visitors can sit in the exhibition theater to watch video testimonies of Holocaust survivors.