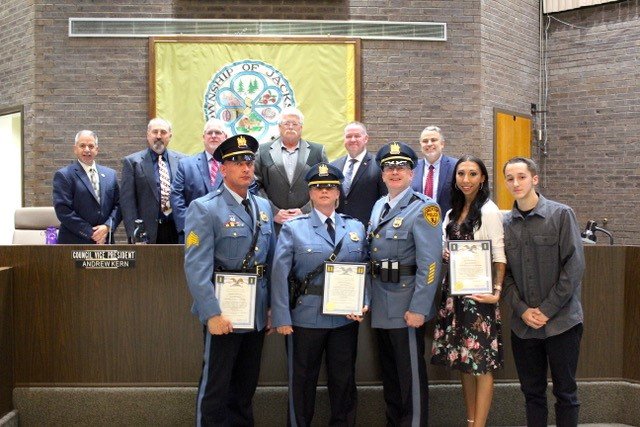 Chief of Police Matthew Kunz introduced three officers to the public and council who were are promoted to new ranks.

Lt. Mary Nelson #255 was promoted to the rank of Captain. Captain Nelson began her law enforcement career with the Ocean Township (Waretown) Police Department in 2001. She served as a dispatcher for 1 ½ years before attending the Burlington County Police Academy in early 2003. She was then hired by the Jackson Police Department in August 2004.

She served as a patrol officer and also as a field training officer before being promoted to sergeant in 2011 and being assigned to supervise a patrol squad. She was promoted to lieutenant in 2018 and assigned to supervise a patrol platoon. She has earned a master’s degree in administrative science through Fairleigh Dickinson University and has attended the Certified Public Manager’s course through Rutgers University and has also earned numerous other certifications throughout her career. Captain Nelson is also an instructor for the agency and at the Ocean County Police Academy and serves as the administrative coordinator for the Jackson Township Police Explorer Program and assists in the coordination of the Police and Fire Christmas Toy Drive.

Sgt. Wayne Olejarz #204 was promoted to the rank of Lieutenant. He was hired as a police officer with the agency in 1997 and served as a patrol officer. He was promoted to sergeant in 2011 and was assigned to supervise patrol squads on the midnight and afternoon shifts. Lt. Olejarz has served on the department’s Special Response Team and the Ocean County Regional SWAT Team. He has also served as an assistant policy writer, firearms instructor, physical fitness instructor, defensive tactics instructor and has supervised the field training officer program and bike patrol.

Sgt. Richard Bosley #221 was promoted to the rank of lieutenant. He began his law enforcement career with the Jackson Police Department as a Class I Special Law Enforcement Officer in May, 1995 and in May 1998 graduated from the SLEO II Class at the Monmouth County Police Academy and began working as a Class II Special Law Enforcement Officer. He was hired as a full-time police officer in December 1999 and graduated from the Ocean County Police Academy.

He served as a patrol officer until being promoted to sergeant in May 2015 and being assigned to supervise a patrol squad. He supervised the agency’s Quad Patrol Unit and was also a traffic investigator where he was assigned to investigate fatal and serious motor vehicle crashes in the township and also in Ocean County as a member of the Ocean County Prosecutor’s Office Fatal Accident Support Team. Lt. Bosley was most recently assigned as the sergeant supervising the agency’s Traffic Safety Unit. Lt. Bosley was not available to attend the meeting and his daughter Rebecca and son Jonathan were present to represent him.