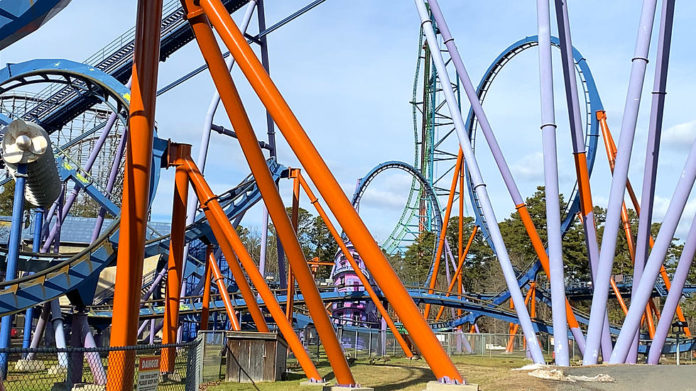 With hundreds, if not thousands of families planning to go to Six Flags Great Adventures in Jackson over chol hamoed Pesach, some are wondering: what’s new?

Well, the park has made some big improvements for this season, which officially began May 1st, with park officials saying the upgrades represent the largest array of improvements in the park’s 50-year history.

One of the primary changes made to the park for 2022 is the return of Medusa – the seven loop roller coaster that thrilled thousands after opening in 1999, which was at that point the world’s first floorless, top-rail roller coaster. 10 years later, the ride was renamed Bizarro, but it’s now being converted back to its original form.

Six Flags will have eight rides geared specifically to youngsters, including the Lil’ Devil Coaster, which is the young rider version of the Jersey Devil Coaster.

The Wild Safari will have three giraffe calves, a new rhinoceros, and a bunch of various new baby animals. The Safari will also feature a brand-new audio tour that can be streamed from any mobile device.

There will also be a new “Giraffe Encounter” Safari VIP Tour, an off-road adventure on military-style trucks that will bring guests through seven sections of the safari and provide them an opportunity to hand-feed giraffes.

Six Flags has also made upgrades to its process for admittance onto rides, including transitioning from its The Flash Pass Q-bot to mobile Q Smart Technology, which it says will allow guests to spend significantly less time waiting on lines.

Throughout the park, including the Wild Safari, guests will see beautification and modernization, including new pavilions and electric vehicle charging stations, as well as an increase in ride capacity and admission efficiency.