The so-called Freedom Convoy passed through New Jersey today, with hundreds of people cheering in support of the truckers lining overpasses.

Hundreds of trucks and other convoy vehicles traveled up Routes 17, 3, 46, and the I-80 towards the 287, covering the Garden State with individuals protesting vaccine mandates and other COVID rules and restrictions.

The protest is modeled after the trucker protest in Canada which effectively shut down the capital city of Ottawa for days on end as Prime Minister Justin Trudeau essentially declared war on them.

While the original plan was to traverse New Jersey and then head to Washington, D.C., it isn’t clear as of now whether all members of this convoy will make the trek down to the capital.

A second leg of the New Jersey trucker convoy will be departing on Sunday.

Other similar trucker protests have traversed wider swaths of the country, but only a handful of truckers followed all the way along to Washington. 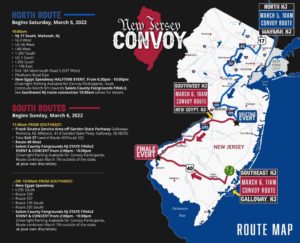