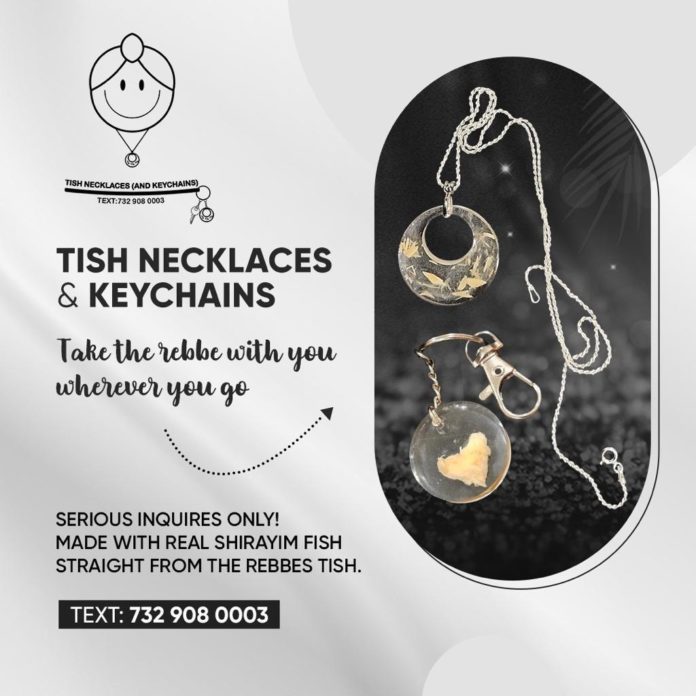 A local woman has begun selling keychains and necklaces with fish shirayim from various rebbe’s tischen, which buyers can then keep on them throughout the day.

The business’s proprietor told Lakewood Alerts that she got the idea for her business on a trip to Eretz Yisroel, when she managed to obtain some fish from the Toldos Aharon Rebbe’s tisch, put it in a necklace, and gave it to her friend who was extremely close to the rebbetzin.

“She was so touched by the gift that the idea popped into my head – there are surely many people who would want such an item,” she said.

“The idea of these necklaces and keychains is to carry around the ruach of the Rebbe with them all day,” she added. “It’s not being sold as a segulah or anything like that; it’s for people who want to feel connected to the Rebbe at all times.”

Currently, the business is selling necklaces ($50) and keychains ($40) with tisch fish inside them – and there are plans to expand. Its proprietor is also working on adding fish-filled cufflinks to its line of products, which she says she has received many requests for, and has now launched a website for its products – tishnecklaces.com

Thus far, fish she obtained from the Vizhnitz and Toldos Aharon tischen are sold out, but she has fish from the Skulen Rebbe of Lakewood available. She is working to procure shirayim from additional rebbes.

And no, there’s no need to worry about the smell. The proprietor told Lakewood Alerts that the fish is placed in resin before being applied to the necklace or keychain. This ensures that there is no smell, preserves the fish, and also hardens it so that it will not decay.

“There are a lot of people to whom this really means a lot,” she said. “For many, being able to carry around such an item really brightens their day.”