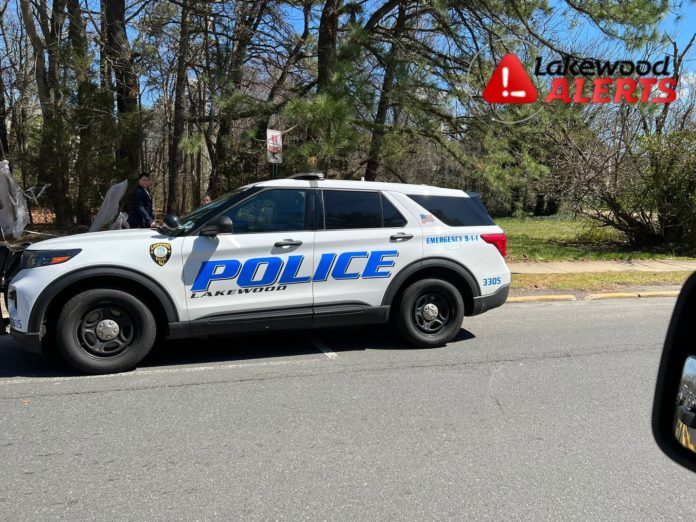 A frum man was assaulted and his vehicle carjacked on MLK and Pine a short time ago.

According to reports, the man had been in his vehicle when the incident began, with the suspect strongarming him out of his vehicle and punching the victim in the face.

The victim was transported by Hatzolah to a local hospital for treatment of his injuries and has since been released.

The suspect had initially attempted to carry out a separate carjacking but was thwarted when the driver moved his car as the suspect hung onto it, causing the suspect to fall to the ground.

A major investigation and search is now underway. The suspect has been described as a dark-skinned, black or Hispanic male.

At approximately 1:20 pm the Lakewood Police Department received a call that a 49 year old Lakewood man had just been carjacked in the area of Martin Luther King Drive and Pine Street. Although details of the incident are still developing, we do know that the victim sustained injuries during the taking of his 2016 Gray Toyota Camry, bearing NJ registration RBG-94F, that resulted in the transportation to a local hospital for evaluation and treatment.

Additionally, while officers were on location, we received information that the suspect, described to be a Black or Hispanic younger man, wearing a green shirt had attempted to carjack another vehicle as it traveled east on Arlington Avenue approximately 20 minutes before.

This investigation is on going, with the assistance of the Ocean County Prosecutors Office, Ocean County Sheriff’s Department CSI Unit and members of the Lakewood Civilian Safety Watch. Anyone with information is urged to contact Det. Tyler DiStefano at 732-363-0200 ext. 5341. Anyone who observes the stolen vehicle is advised not to approach and to immediately contact their local law enforcement agency. 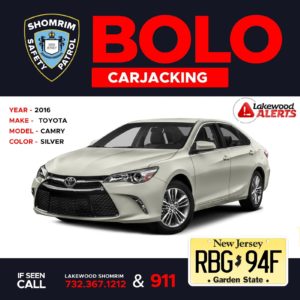