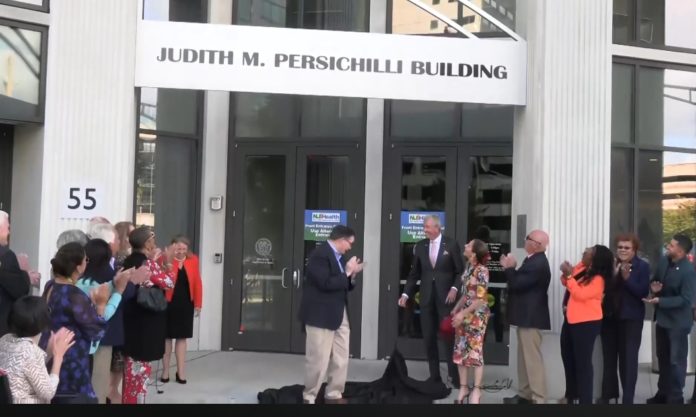 The Governor unveiled the new name following his announcement in June 2021 that the building would be named in honor of Commissioner of Health Persichilli for her service to the people of New Jersey, particularly during the COVID-19 pandemic.

“Commissioner Persichilli has been an invaluable advisor and partner over the past several years, helping our state navigate the many challenges of an unprecedented pandemic,” said Governor Murphy. “Her composure and dependability as she led the Department of Health and kept residents informed alongside me during countless COVID briefings has made the name ‘Judy Persichilli’ ubiquitous throughout our state. This building will serve as a reminder of the illustrious career of ‘the woman who needs no introduction,’ both as a leader in the health care sector and as New Jersey’s distinguished Commissioner of Health.”

“To say I am overwhelmed and humbled by this honor is an understatement,” said Commissioner Persichilli. “This building will reflect the hard work and commitment of all who have worked throughout the pandemic and our commitment to public health.”

Throughout the pandemic, Commissioner Persichilli led the Department of Health and guided the State’s response to a novel and deadly virus while sharing critical information with the public during the Governor’s regular COVID-19 briefings.

The enabling legislation signed by the Governor in November 2021 to designate the state-of-the-art facility at 55 North Willow Street, which was completed in late 2020, was sponsored by Senator Shirley Turner, Assembly Speaker Craig J. Coughlin, and Assemblyman Raj Mukherji.